November 15, 2013
From start to finish, the Disney World Wine and Dine Half Marathon weekend was an amazing experience. If you haven't done a Run Disney race before, I highly recommend you consider doing one. Disney puts on a high quality race with a unique experience only Disney can provide

We arrived into Orlando Thursday afternoon and checked into the Pop Century Resort. We prefer to stay at one of Disney's 'value' resorts. Having Disney transportation to get to and from the parks and races is important to us, but we don't need a fancy room, since we try not to spend too much time in it.

Once we unpacked, we had a little time to relax until it was time to drive over to Epcot for the RunDisney meetup. Because this event was scheduled to end long after the park closed, we were on our own for transportation to and from the park.

Checking into the meetup was a breeze and we had 90 minutes to roam Epcot and a fast-pass to jump on Test Track. After riding Test Track and grabbing some food and beer, we settled in to watch Dennis DeYoung, the former lead singer of Styx perform several songs, including my personal favorite Mr Roboto


After the show, it was time for the meet-up. We had a private area with prime viewing of the Illuminations light and firework show 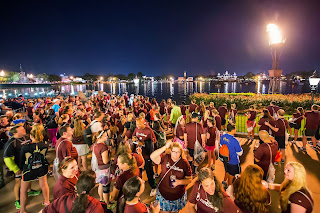 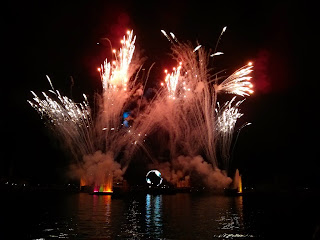 Once the fireworks were over, we headed to the American amphitheater for the next stage of the meet-up.

We were treated to a sampling from their vegetarian food and wine fest stand including a small glass of wine. While we waited for the next part to start, Cathy and I got a picture with Chef Mickey 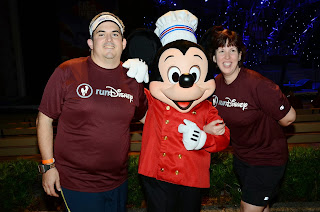 The M.C.s for the night, Darrel Fry and Farron Kelly kicked things off with a couple of giveaways, including a RunDisney bag and a couple free race entries. 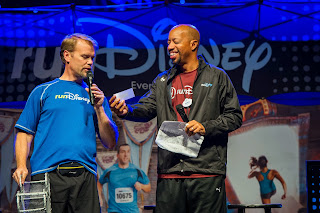 Next up was Jeff Galloway and nutritionist Tara Gidus. Jeff talked about pacing yourself and not going out too hard. He also revealed he is training to qualify for Boston (I don't remember which race he said was his target race). Tara talked about race day nutrition for a night race. Her recommendation was to eat light and eat often. She also stressed because it was expected to be hot, hydration is especially important 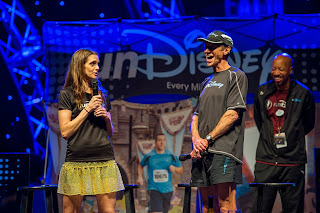 Next they brought up a couple of chef's and their sommolier to discuss many of the offerings at the food and wine festival. 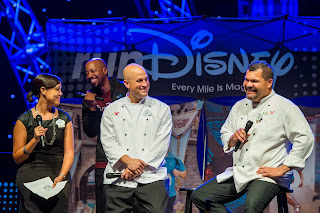 Ali from New Balance came up to discuss, among other things, the much coveted New Balance Run Disney shoe. She teased the new box the shoe would come in, along with showing us the new custom inserts that could be purchased for each race in the series. Side note: tomorrow 11/16 they are expected to officially announce the character they based the design on for 2014 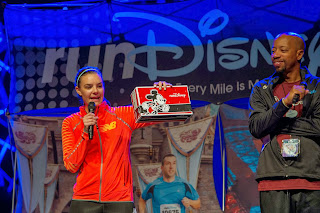 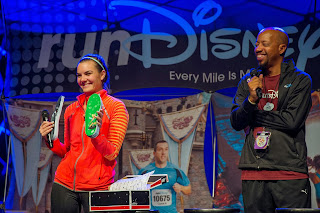 There were a few more giveaways and then Jenny Simpson, the women's world record holder in the mile (4:19 holy smokes) came up to talk about her experiences running runDisney races. 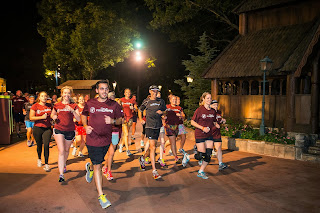 We did 1 1/2 loops around the world showcase and then regrouped so we could run towards spaceship earth. 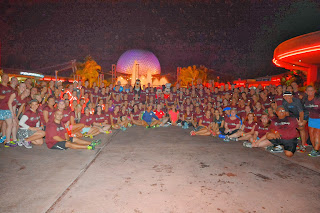 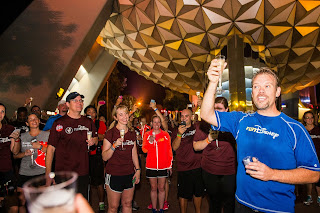 All in all, it was an amazing experience that I will never forget. If you can get yourself into a runDisney meetup, then don''t hesitate to do so. See my previous blog post for tips to get into a meetup.

Tomorrow morning, I get to experience more runDisney excitement when their first #OnTheRoadToDisney meetup stops here in Atlanta.