November 17, 2013
See Part I for my write-up on the runDisney #WineDineHalfMeetup.

On Friday, we headed into the parks. This was our first time in the parks since we moved from Florida to Georgia in 2000. Prior to that, Cathy and I had the Florida resident passes and we would go to the parks several times per year.

Our first stop was the Magic Kingdom. We were there bright and early when the park opened. We had fast passes lined up for Space Mountain, Thunder Mountain, and Buzz Lightyear. We were pretty lucky that we hit all the rides we wanted to in less then 3 hours. We only had to use one fast pass and only waited on one ride for 15 minutes.

Disney has been testing out these wonderful Radio-Frequency powered "magic band" armbands. These armbands, once set up, replace your room key and park passes and allows you to charge purchases to your account with a pin # you specify when you order or are given the magic bands. Once your magic bands are linked to your passes, you can log into Disney's website or mobile app and book up to 3 fastpass+ passes for a single park per day. Currently you can also pick up traditional paper fast pass tickets, though I get the feeling this may eventually change. The best part of the fast pass+ system is you can get your passes days in advance so you don't have to run to the various rides and get your passes.

After riding all our favorite rides at the Magic Kingdom, we rode back to the room to grab our race waivers and headed to the race expo. 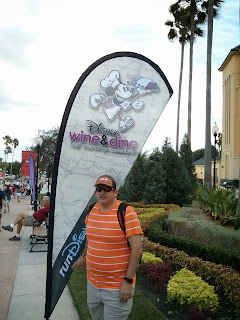 There were a decent number of vendors selling goods at the expo, and lots of great runDisney merchandise 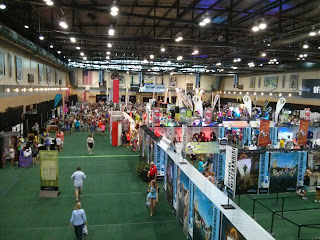 We picked up some great Wine n Dine window decals. These are nice since they cant be stolen the way the magnets can. We also picked up the new medals for our runDisney vinylmation figures (picked up the two ewoks that weekend at Downtown Disney). 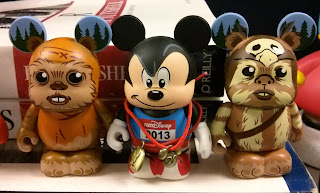 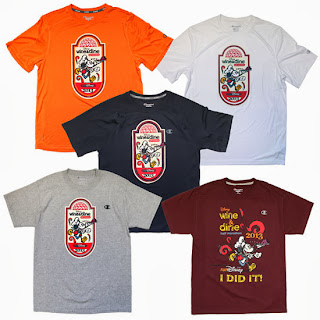 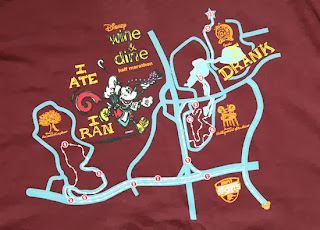 In the evening, we headed off to Hollywood Studios to see the first lighting of the Osbourne Family Lights of the holiday season. 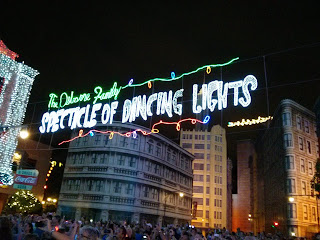 One of the coolest things at the Osborne lights were the Glow with the Show ears. Initially introduced at Disney Land, these ears react at various shows throughout the park. When the Christmas music played, the ears would blink and glow in tune with the music 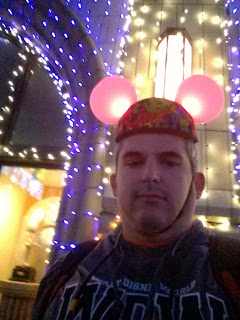 As if two parks weren't enough, we ran over to epcot to meet some friends for a beer.

Race morning began at the Contemporary Resort. We would have liked to have done a character breakfast, but by the time I tried to book it, no reservations were available and we were afraid the wait for a walk-in might be excessive. We had breakfast at the buffet in the Wave restaurant. It was a great pre-race morning breakfast. We made a quick run to the grocery store and then chilled for a few hours.

We hit the buses at 7PM and were at the start line area before 8. We had about 90 minutes to kill before race start. As with any Run Disney Race, they kept the racers in the holding area entertained with music and photo ops with Disney characters 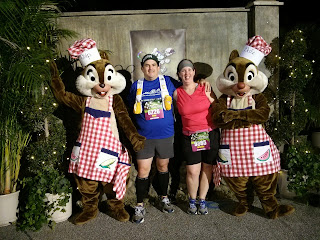 At 9:30 we entered our corral. The race started around 10 and our corral went off at 9:25. We had no goals for this race, other than having a good time and finishing the race. 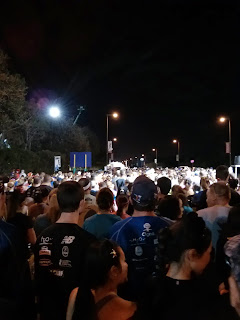 The first 3.5 miles were out on the main road between the parks, Osceola Parkway. This was the road Cathy and I had affectionately dubbed the Death March during January's marathon. The first park we entered was Animal Kingdom. 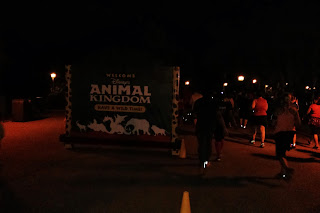 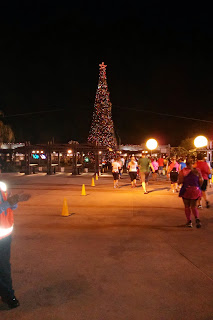 The run through the Animal Kingdom is basically a loop around the tree of life. 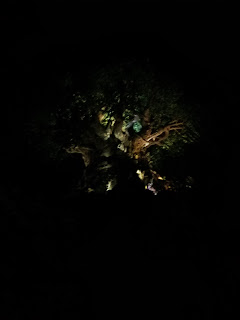 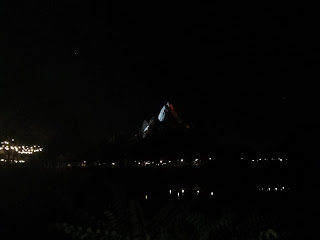 It was neat to see the Tree of Life and Everest lit up at night. We passed through Dino Land before exiting out the back side of the park.

We ran another three miles on Osceola Parkway before we made a turn and headed towards Hollywood Studios.  We entered Hollywood Studios around mile 9. The course passes the Tower of Terror and then heads along sunset boulevard towards the giant sorceror hat. After about a half mile, the course takes a turn onto a service road for a mile. 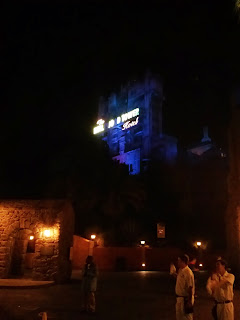 The highlight of the course starts at about mile 10.5 when the course runs through the Streets of America portion of the Studios, which has been transformed into the Osborne Spectacle of Holiday Lights. I stopped to take lots of pictures along the way, since the park was closed and there were no crowds like when we went through the previous night. 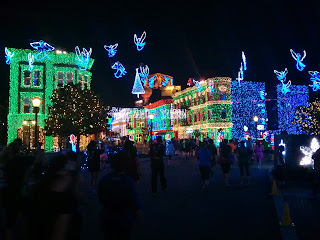 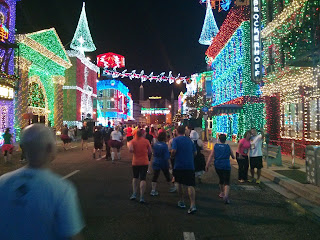 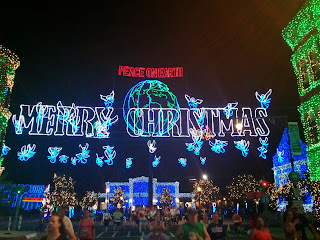 The course exits the Studios around mile 11. On the way to Epcot, the course passes by the Boardwalk and Beach club resorts. By this time, we were just ready to be done. We ran about a half mile through Epcot  and finished just outside of Epcot in the parking lot at around 3:24:11. We stopped at the "self-service" aid station and iced our painful spots for about 20 minutes. Both of use were tired and sore and decided to skip the after party since it would have been close to a mile just to make it to the World Showcase in Epcot for food and beer.

Our original plan was to hit the parks on Sunday morning, but by the time we got to bed, we decided not to set an alarm and sleep in. We hit Downtown Disney for lunch at Cookes, the counter service Irish restaurant next to Raglan Road. We also enjoyed a few Irish beers before getting our shopping on. We enjoyed dinner with some friends in from town and hit the bed early since we had a busy day planned for Monday, our last day in the parks.

We started off the day at Epcot, rode a few rides, had an awesome sushi lunch at the Japan pavilion and took advantage of a photo op with Donald Duck 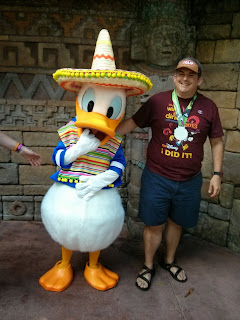 That night, we headed to the Hollywood Studios. The highlight of the night was the Fantasmic Show that night. If you are going to Walt Disney World it is not to be missed. It is a live action firework and laser show that includes scenes projected onto a wall of water. The Glow With The Show ears even react to the show. My only disappointment was that there weren't more people wearing the ears. If you look at the video on the link I posted above, the effect was quite dramatic. At the show I was at, it was neat, but not as awesome as it could have been with an amphitheater filled with glowing ears.

We headed home on Tuesday, sad we had to leave so soon. As of right now, our next Run Disney race isn't until January 2015, but this may change. If you are considering doing the Wine and Dine half, I would highly recommend it. It was an amazing experience.