#WineDIneHalfMeetup - I Got A Golden Ticket

This is how I felt yesterday after finding out Cathy and I got into the Disney Wine and Dine Half Marathon Meetup.

If you are a fan of running races put on by Run Disney, you probably know what their meetups are. If not, at the beginning of every Disney race weekend, they host a small private meetup, usually limited to around 50-100 people. It includes celebrities, such as Sean Astin, Joey Fatone, or Drew Carey as well as big name runners, including Jeff Galloway. It usually takes place in the morning before the parks have opened and includes a group run, talks by the celebrities, and talks on running/nutrition. It is a highly coveted event which when announced, fills up within minutes

This event will be somewhat different. This time, it will happen at night and they invited 125 runners to attend. The fun begins with a viewing of the Illumination laser light and fireworks show in Epcot. It sounds like there will be a food and wine tasting/talk along with a talk from "some Olympic endurance runners" including some advice on nighttime running safety. Finally, after the park closes, the group will go for a run "around the world"

Getting close to Wine and Dine weekend, which is less then three weeks out, I was hopeful to get into the meetup. Since getting hooked on running Disney races, I have seen lots of tweets and blog posts with pictures of all the fun that happens at these meetups. I wanted to be a part of that

I expected the teasers to start soon, with the formal go announcement closer to a week or so out from the race based on what I have seen with other races. Well, this time, Disney decided to pull a fast one on us. 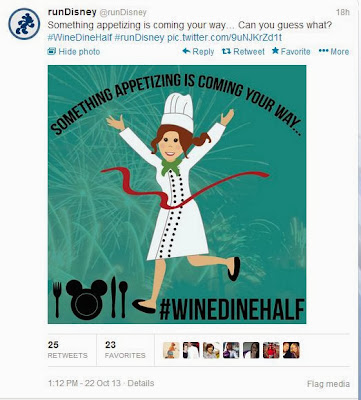 Many of us correctly guessed that this was a teaser for the upcoming meetup. What we didn't expect was less then an hour later, we would see the official announcement tweet 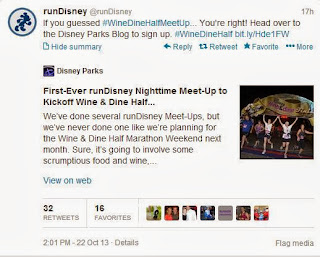 Luckily, I was prepared for this. I already had my email ready in my draft folder and within 2 minutes, I had my emails out. By the time I got both emails out, my heart was racing and my hands were shaking. From what I saw on my twitter timeline, I wasn't the only one experiencing the RunDisney meetup jitters. All I could do at this point was calm down and wait. By about 2:30, the blog post was updated that they had filled all the slots. For the meetups, it is first come first serve. They simply choose the first X number of emails they receive. The post said that BY 5PM they would post the attendee list. I started regularly hitting the refresh button by 4PM. At 5:48 the tweet came in announcing the list was up and Cathy and I both got in.

During the meetup, I plan to take lots of pictures and post them all to twitter, and of course I will post a write-up of my experience here. Between now and then, I need to work on taking pictures and tweeting while on the run.

My Tips for Getting Into a RunDisney Meetup

2. Turn on twitter mobile notifications for @RunDisney so you get a text message for every one of their tweets. This option is found by going to @RunDisney 's twitter page and clicking on the pic next to the follow button 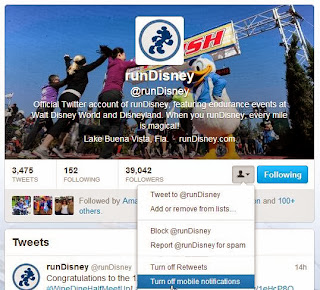 3. Have your email ready to go - up to this point, the meetup email address stayed the same, so have your email typed up and saved in your drafts.

The email address is different for Disney World vs Disney Land

All the email needs is your full name, it is as simple as

Please add me to the RACE NAME meetup

Thanks
Your Name Here

If you are sending emails for more then one person, be aware that they must come in separate emails. I went as far as to use two different email addresses to send the two emails, but from what I have read, this may not be necessary.

4. Watch for the teaser tweets - as I mentioned, they have always posted at least one teaser tweet before posting the official tweet. Once this happens, keep a close eye for new posts from @RunDisney

I can't wait to experience all that is the Wine and Dine Half Marathon Weekend Meetup. I will get to meet lots of people I interact with on twitter, and maybe a few celebrities. If you are a fan of running races at Disney, I highly recommend trying to get into one of their meetups