May 09, 2013
On Saturday April 27th, I raced my first triathlon of the year. I came in to the race fairly undertrained for the swim and bike, but I came out happy with the final results. I finished close to a PR (when you adjust for the differences in distance) and a renewed sense that all the running I have been doing is paying off. Now I just need to do the same for the swim and the bike.

Tri The Parks is a local triathlon race series that holds races throughout state parks in Georgia. Before Saturday, I had not raced one of their races before. There was no reason for this other then scheduling conflicts or races too far from home to drive in race morning.

1st Choice Healthcare is a local chiropractic/sports massage company that is very active in the running and triathlon communities. You will find their chiropractors often at local races providing free post race massages and stretching out tight muscles.They were giving away several race entries a few weeks ago and I was lucky to snag a free entry into the Tri The Parks race at John Tanner State Park in Carrolton, GA.

Carrolton is about a 2 hour drive from my home. I was lucky that Tri The Parks has a race packet pickup at All 3 Sports which is about 20 minutes from my office. By picking up my packet during the week, I was able to get an extra half hour of sleep on race morning.

Saturday morning I got up at 4 AM and the first thing I did was to check the weather. We were facing a threat of heavy rain and I had already decided I would skip the race if the weather was not going to cooperate. While it was raining heavy by the house and more was on the way, there was no sign of rain in Carrolton. We left about 5 AM and were there just after 7.

When we arrived, the first thing that stood out to me was how close we actually parked to transition. In the 5+ years I have been doing triathlons, I have become accustomed to walking anywhere from half a mile to a mile from parking to transition. I was no more then 100 yards from the entrance to transition. I was lucky enough to get a end spot on my transition rack, which was only occupied by 3 other bikes. After the usual race morning routines, including chatting with friends, I headed down to the lake to test the water.

The night before, I broke out my wetsuit to get it race ready. It is important that before you wear it after several months with no use that you prep your wetsuit for a new season. my first step was to soak it overnight. Then, on Friday I did a short open water swim in it to stretch it back out and get used to wearing it again. When I got in the water to warm up on Saturday, I could definitely tell the difference between how it felt the night before. It felt much more comfortable. For more great tips on wetsuit maintenance check out All 3 Sports's Wetsuit 101 page.

I was in the second swim wave with all the Masters and my fellow clydesdales. I tried my best to find a spot right in the middle of the action before we took off. When the horn went off, I took the first 100 meters to find my rhythm and find my spot in the pack. The swim course had you swim along the shore, make a sharp almost a u-turn and swim back in the opposite direction before making the turn in towards the shore. When I made the turn, I got the sense that I was towards the front of my wave.

I ended up third out of the water in Clydesdales by about 20 seconds. I ran into transition with my wetsuit half off. I had my wetsuit off as soon as I hit my rack and was ready to head out on the bike 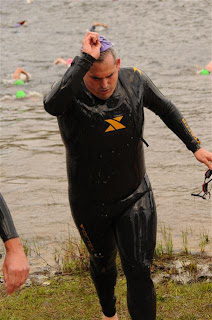 I did not have very high expectations going into the bike. I had not been out on the road since last year. Most weeks I was doing one spin class and one trainer ride. My only goal was to push myself as much as possible, trying not to be passed by too many clydesdales. I was passed by one or two clydesdales on the bike, but was glad I was at least able to maintain over 17 mph on a hilly course.

On the ride, I came to an important realization. I was fit on my bike two years ago when I purchased it by the person who sold it to me at the local bike shop. I had positive results the first tri bike I bought there, so I didn't have too much concern. Unfortunately as I found out last week, my fit was totally wrong for me. It was so uncomfortable to be in aero, I spent most of the time sitting up. By the time I got off my bike, my back hurt and my legs were tight. When I was in aero, my knees tended to flair out to the side. After being re-fit this weekend by one of the best fitters here locally, I am feeling much better on the bike. 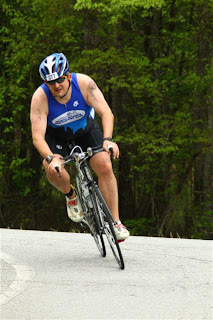 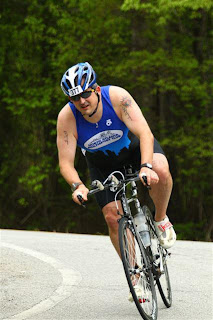 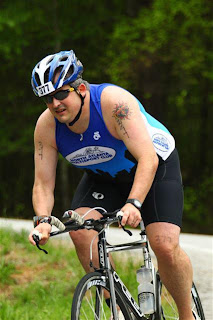 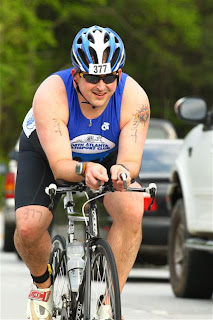 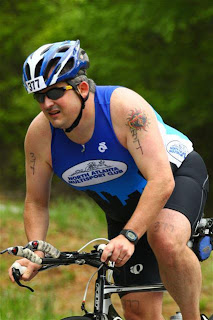 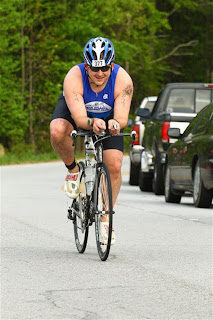 By the time I got out on to the run, I knew there was little chance of placing in the Clydesdale division, but I still wanted to push myself and see if a PR was possible. I crossed the first mile in 8:49 and was feeling really good. I wanted to really push myself on the run and see how much speed I might actually have without having done any speed work.The next mile was much slower, but this was due in part to the "massive" half mile hill you climb before the turnaround at mile 2. I took one or two short walk breaks as I climbed the hill, but once I turned around and headed downhill, I picked my pace back up and averaged 9:13 on my last mile. One thing I have noticed in the last few months since increasing my volume is that even when I have to slow down or walk up a hill, my heart rate and breathing recover much quicker so I can pick my pace back up.

Overall I was pleased with my results.The weather was perfect and I pushed myself to the best of my current fitness level. They run this same race again in September and I have already decided to go back then and do even better. 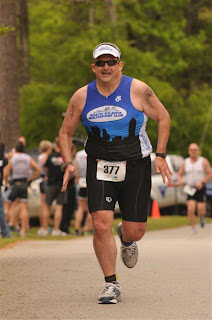 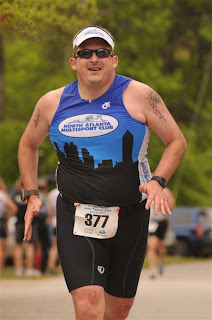 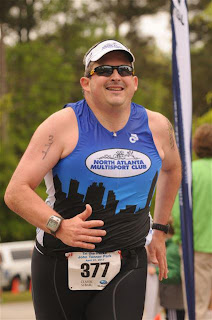 This race started off 4 straight weeks of racing. This past Saturday, I ran the Big Peach Leukemia 5K. It was a soggy, hilly, cold mess, but I finished in 28:52. I was happy with this result because I kept a fairly steady pace for all 3 miles, even though the course was hilly.

This weekend I have a 10 mile trail race that I am really looking forward to. It will be my first ever trail race. I have been running trails at least once a week for several months now. The only thing I am slightly concerned about is the weather. We have received several inches of rain in the past week. Over the weekend parts of this trail were flooded There is more rain in the forecast for tomorrow night and Saturday morning. This may turn the 10 mile trail race into a 10 mile mud race. Either way, I am looking forward to a fun race
race reports triathlon

Lindsay said…
veyr belated congrats! sounds like the race went well. glad you figured out the bike woes - it's no fun being uncomfortable on the saddle!
May 28, 2013 at 6:00 PM